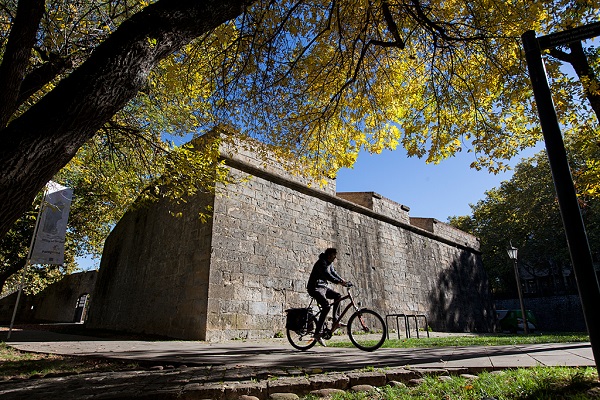 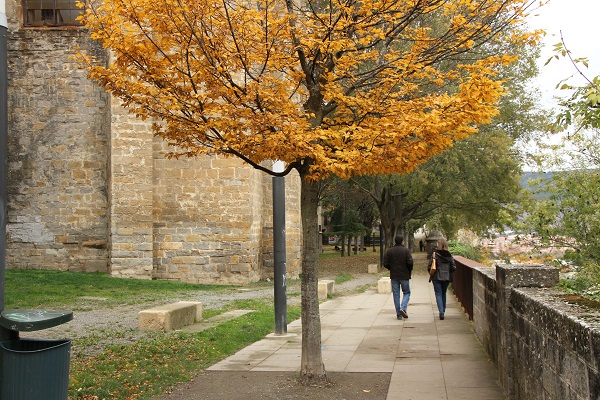 We can use the three medieval communities that formed the modern Pamplona as a way to find out about the heritage of what became, after the Privilege of the Union of 1423, the new walled city.

Occupying the area surrounding the current cathedral, this borough is the direct descendant of the Vascon Iruña and Roman Pompaelo. Its name would appear to be derived from how the people from the mountains referred to the district: naba, ‘basin’ in Basque, and herria, ‘village’. Its inhabitants were the true “Navarrese”.

Here stands the Santa María la Real Cathedral, Navarre’s masterpiece of Gothic architecture. It owes its name (Real means ‘Royal’) to the fact that royal coronations used to be held in it, after the about to be monarch swore to uphold the Charter of the Kingdom. The Gothic cathedral (14th-16th century) was erected with the backing of King Charles III the Noble following the collapse of the Romanesque cathedral built between 1100 and 1127. It is one of the most complete cathedral complexes in Spain and has one of the finest Gothic cloisters in Europe. Areas such as the storehouse, chapterhouse, refectory and kitchen both house and form part of the Diocesan Museum’s award-winning Occidens exhibition. In the centre of the aisle is the imposing alabaster tomb of Charles III the Noble and Eleanor of Castile. The Gothic cathedral is concealed behind building’s notable Neo-classical façade, designed in 1783 by the renowned architect Ventura Rodriguez. In the north tower, you can see the María Bell, the largest bell in use in Spain.

Presiding over the Arga river is the Royal Palace, which King Sancho VI the Wise had built in the 12th century. Renovated by Rafael Moneo, it is now home to the General Archives of Navarre. Following the wall-walk south, you arrive at Plaza de Santa María la Real, where the city’s Jewish quarter used to be.

AROUND THE SAN CERNIN BOROUGH

This district was inhabited by Franks -chiefly craftsmen and merchants- who came as a result of the Way of St James. Remains of its walls still exist at Belena de Portalapea, where the Tower of Johan Caritat and catapult projectiles from the War of La Navarrería (1276) can still be found.

In front of the Belena stands the graceful San Saturnino Church, whose function was as much defensive as it was religious. A generously proportioned Gothic building (13th century) with a single nave, the Baroque Chapel of the Virgin del Camino now occupies the space where the church’s cloister was once located. Its 55-metre prismatic towers are the most characteristic feature of the Pamplona skyline.

At the beginning of Mayor Street, formerly the focal point of the borough, is the Condestable Palace, one of the most important houses in the city and declared of a Site of Cultural Interest (1997). Its first floor houses the Sarasate Museum, dedicated to one of Pamplona’s most universal residents, which contains objects, works of art and instruments that the violinist donated to the city.

At the heart of the borough is the Court of Auditors, the city’s only civil Gothic building. It was the head office of the Court of Auditors of the Kingdom of Navarre between 1524 and 1836, and was responsible for controlling royal finances and minting the local currency. Among other functions, it now also serves as one of the most complete archives on the Late Middle Ages in Europe.

Returning to Mayor Street, we find Ultreia, Interpretation Center of the Way of Saint James and the Ezpeleta Palace, without a doubt the finest example of Baroque palace in the city. Commissioned by the Marquises of San Miguel de Aguayo in 1709, it has a magnificent doorway with scenes from the military career of its first owner.

The construction of the San Lorenzo Church dates back to mediaeval times, when, with a high tower, it had a defensive function. Inside is the Chapel of Saint Fermin, with a reliquary bust of the saint. No visitor should leave without visiting the Museum of Navarre. It contains wonderful exhibits, such as the casket of Leire, Goya’s portrait of the Marquis of San Adrián or the unique Romanesque capitals of the old cathedral by Master Esteban, not to mention the map of Abauntz or its Gothic wall paintings. Next to the Museum, carved into the wall at Santo Domingo street, we find the niche of San Fermín. This is the place where runners prey to the saint minutes before starting the bullrun each morning, during the San Fermin festivities.

THE COMMUNITY OF SAN NICOLAS

This borough’s main point of defence was the San Nicolás Church. Its vaults and apse are Gothic, while the rest of the building is Cistercian. Its great Baroque organ is the best in the city. The small Plaza del Consejo is home to the Counts of Guenduláin Palace, built by Sebastián de Eslava, Viceroy of New Granada, in the middle of the 18th century. Inside there is a magnificent Rococo Berlin carriage. In front of the palace is the Baby Neptune's Fountain, perhaps the most emblematic one of all that Paret y Alcázar designed because of the water supply being brought to the city.

The Plaza del Castillo, the true heart of the city, also stands out. Next to the square is the Palace of Navarra -HQ of the Autonomous Government- and the Gayarre Theater.

The Baroque facade of Pamplona City Hall stands in the square where the three old mediaeval boroughs that made up the city converged before they merged and is also home to the Tourist Office.

After the Privilege of the Union, the medieval city walls fell into disuse. Their obsolescence was confirmed by the conquest of Pamplona at the hands of the artillery of the Duke of Alba in 1512.

By the 16th century, Pamplona was an outpost of the Castilian crown bordering France, which meant that a first-rate defensive system needed to be built, with sloping walls able to withstand modern artillery, bastions, ravelins, counterguards, drawbridges and so on. There are three fronts: MAGDALENA-FRANCE FRONTS, ROCHAPEA - TACONERA FRONTS and CITADEL

The San Bartolomé Fort was built in the 18th century, to strengthen the defensive capabilities of the 16th century walls.It was designed by Jorge Próspero de Verboom, a disciple of the famous French engineer Vauban.

Next is the Labrit Bastion, the oldest bastion in the entire fortified area. Next to it are the Archbishop's Palace, the Labrit Fronton Court and the Jito Alai.

Following the wall-walk north, we arrive at the El Redín Bastion, one of the most emblematic spots in the city and an unbeatable viewpoint over its typical Renaissance defensive system. The historicist inn now on the bastion was built in the 1960s and has since lent its name to the location, Caballo Blanco Corner. The Fort of San Cristóbal, the city’s most recent defensive construction and the scene of tragic events during the Spanish Civil War, watches from Mount Ezkaba.

As a fortified city, Pamplona only had six gates, all built between the 16th and 18th centuries. Local taxes on food, drink and fuel brought from outside the walls were levied in their gatehouses. Next to El Redín is the Gate of France, the only one of the six still occupying its original position. Consisting of three gateways, it still preserves its system of counterweights and bending structure.

Further on, going up the Rochapea Gate, which gives its name to the wall front, we find the Portal Nuevo, which despite having undergone numerous modifications, is one of the most spectacular entrances to Pamplona.

Once we arrive at the Taconera Gardens, located in the Taconera Bastion, we will be able to discover portals as triumphal arches, such as the portal of its namesake and the San Nicolás Gate, in addition to the Taconera Bastion. The two remaining doors of the walled enclosure are the Rochapea Gate and the Tejería Gate, which disappeared at the beginning of the 20th century.

Fortification of the city was not complete, however, until the Citadel, most probably the best exponent of military architecture from the Spanish Renaissance, was built. Ferdinand the Catholic demolished the mediaeval castle of Luis Hutín and built the Fortress of Santiago, but it was not until the reigns of Charles I and Philip II of Spain that Pamplona’s Renaissance defensive system began to take shape. The Pamplona Citadel, the ‘most main castle’, now the city’s green lung and a contemporary art centre, is the oldest pentagonal citadel in the world still standing. By order of King Philip II, it was designed in 1571 by the Italian Giacomo Palearo, the Fratin, and the Viceroy of Navarre Vespasiano Gonzaga y Colonna. Those unaware of the fact that two of its five bastions used to face the interior of the city will fail to understand its true function; as the engineer Antonelli informed Philip II, ‘it should serve to defend from external danger, and from internal danger, too.’

It is possible to access the interior of the square from the main door of Avenida del Ejército or from Socorro Gate for free.

HEMINGWAY AND THE WALLS OF PAMPLONA

Ernest Hemingway wrote about the walls of Pamplona in his very famous book 'The Sun Also Rises/Fiesta'.

Extract about the Citadel:

'We walked out across the wet grass and onto the stone wall of the fortifications'.

'Across the plain, it was dark, and we could see the mountains'.

'All along the old walls and ramparts people were standing. The three lines of fortifications made three black lines of people. Above the walls there were heads in the windows of the houses'.