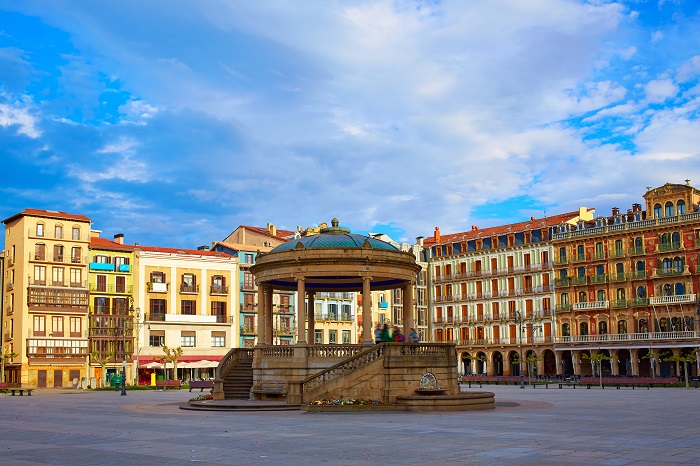 This place could be considered the heart of the city. The almost 14k square metres it occupies have been a hot spot throughout the history of the city of Pamplona. It was named after the castle that once stood on the eastern part of the plaza, near the Bajada de Javier, built by Luis Hutín in 1310, the current plaza being the parade ground of the former edifice. In the late Middle Ages, the plaza was a no-man’s-land of sorts during the difficult times endured by the three former burgos or towns. In addition to its military function, it operated as market place in 1324 and was also used to sow grass and wheat in the 14th century.

The site became a plot of open land that was gradually integrated into the life of the city during the 17th century, as new buildings began to be built, not without difficulties due to the lack of urban tradition of these premises. This urban development started in the mid-17th century and continued until the 18th century.

Then the plaza took on a new role as leisure area, ideal to hold events. Since 1405 it became the stage for celebrations and justs commemorating anniversaries of the monarchs or the days of the city’s patron saints. Additionally, from 1385 to 1844 (when a stable bull ring was built) it was here that bullfights were held. The first building to be erected here, around 1612, is in line with this context, as it was the house containing the toril (bull pen), overlapping today’s building in no. 37, on the western side of the plaza. Later on, in the 19th century, justs and bulls gave way to cafés, thus retaining its social function which, together with other services, it still keeps today.
The kiosk in the centre was installed in 1943 to replace a former wooden kiosk from 1910 which, in turn, had replaced the 18th-century Fountain of Beneficence, the latter by Luis Paret. The main sculpture from the fountain – aka “la Mariblanca”, can now be found in Taconera Gardens.

Recent excavation works conducted during the building of an underground parking and subsequent reorganization of the plaza have unearthed archaeological remains from different periods: a fragment of a Roman mosaic, one hundred interments from a Muslim necropolis plus remains of the medieval convent of Santiago, the latter with over fifty graves. Additionally, part of the western stretch of the first walls of the former town of San Nicolás was restored and integrated into the parking.

The plaza del Castillo and Hemingway

The Plaza del Castillo is the heart of Pamplona. This place channels the life in the city. It is also the first spot that Ernest Hemingway tread when he arrived with his wife Hadley Richardson on 6 July 1923. Hemingway made the plaza his hot spot in Pamplona.

The plaza holds the Café Iruña, a historic bar, the meeting place for the characters of ‘The Sun Also Rises/Fiesta’. Nearby stands the century-old Hotel La Perla and, just opposite, the building that housed the now now lost Hotel Quintana and, next to it, the Bar Txoko. The characters of Hemingway's novel also walk around the plaza by the now lost Café Suizo (number 37) and Bar Torino – Bar Milano in the novel (number 3), and the American writer enjoyed himself in another cafe, now also lost, in 1953 : Café Kutz (between the Passage de la Jacoba and Café Iruña).

The characters in ‘The Sun Also Rises/Fiesta’ arrive by car in Pamplona to “the big square […] and the square was hot, and the trees were green, and the flags hung on their staffs, and it was good to get out of the sun and under the shade of the arcade that runs all the way around the square”.

Hemingway had good times in the Plaza del Castillo, which he also visited under the names of Plaza de la Constitución and Plaza de la República, where rockets were launched to mark the beginning of the festival of San Fermín (the Chupinazo announcing rocket began to be launched from the Ayuntamiento in 1939) and he even was saddened when in 1931 he noticed that the Teatro Gayarre had been moved elsewhere thus leaving an opening in the square.

From the Plaza del Castillo Hemingway and his group of friends took the bus to the northern locality of Auritz-Burguete (as reflected in ‘The Sun Also Rises’). During the trip they became friends with some countrymen. In the novel Bill Gordon, a friend of the main character, does not hesitate to say: “These Basques are swell people”.