Route of the Way of St James 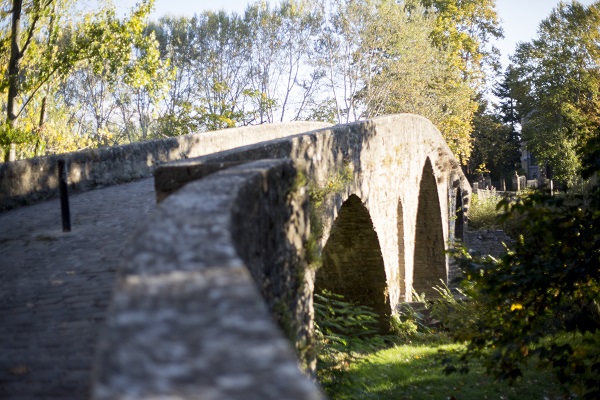 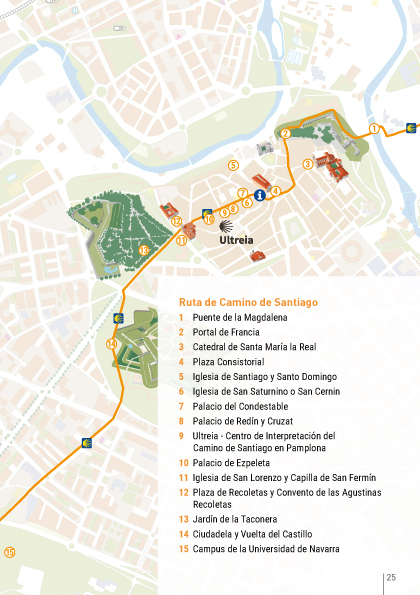 From the town of Burlada, the Way of St James enters Pamplona amidst orchards and allotments on the banks of the River Arga. To reach the city, pilgrims must cross the Magdalena Bridge, a 12th century construction declared a Asset of Cultural Interest and a Historical Artistic Monument. Access to the Historical Centre is through Pamplona’s renaissance walled ensemble, one of the most majestic along the entire Way.

Having crossed the threshold of the walls at the Gate of France, with its 18th-century drawbridge, pilgrims are welcomed by the tranquillity of the old town. The Way of St James climbs Calle del Carmen, through Plaza de Navarrería, from which it is possible to admire the towers of the Santa Maria la Real Cathedral. The cathedral has a Neo-classical façade and houses the mausoleum of the Navarrese king Carlos III, an impressive Gothic cloister and the award-winning sacred art exhibition Occidens, among other treasures.

The Way continues along the cheerful Calle Mercaderes to Plaza Consistorial, presided over by Pamplona City Hall, whose magnificent Baroque façade and balconies bedecked with flowers, from which the rocket which marks the start of the San Fermín festival is launched every 6 July, are not to be missed.

Pilgrims must then carry on along Mayor Street, once the main street in the city due to the influence of the Way of Saint James. The street is flanked on both sides by a number of Baroque and Renaissance palaces, including the Condestable Palace, a 16th-century building declared a Site of Cultural Interest and home to a museum on the violinist Pablo Sarasate, and the Ezpeleta Palace, Pamplona’s finest exponent of stately Baroque architecture. There is an important church at each end of the street: the mediaeval San Saturnino or San Cernin Church, built in honour of the city’s patron saint, and the San Lorenzo Church, which houses the chapel of San Fermín.

Finally, the Way of Saint James leaves the Historical Centre, leaving to one side the beautiful Taconera Gardens, dating back to 1888 to cross the Vuelta del Castillo Park. This is a vast park that surrounds the Citadel, a pentagonal fortification whose construction dates back to the 16th-17th centuries. It then passes through the Iturrama district and leaves the city through the extremely beautiful gardens of the campus of the University of Navarre, noteworthy for their biodiversity.