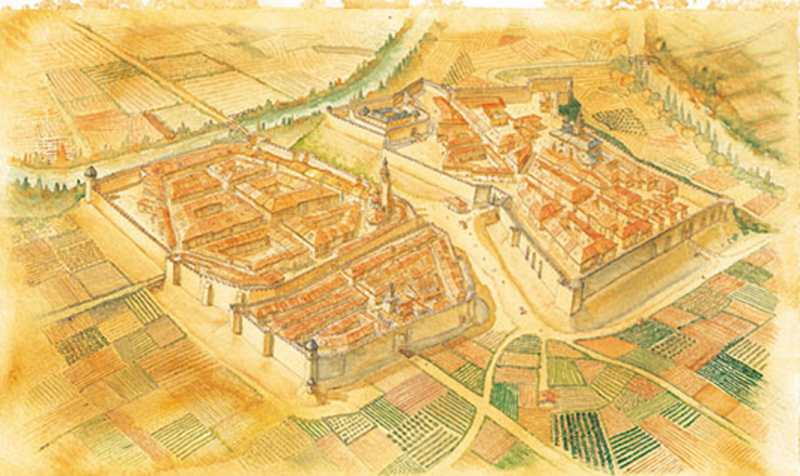 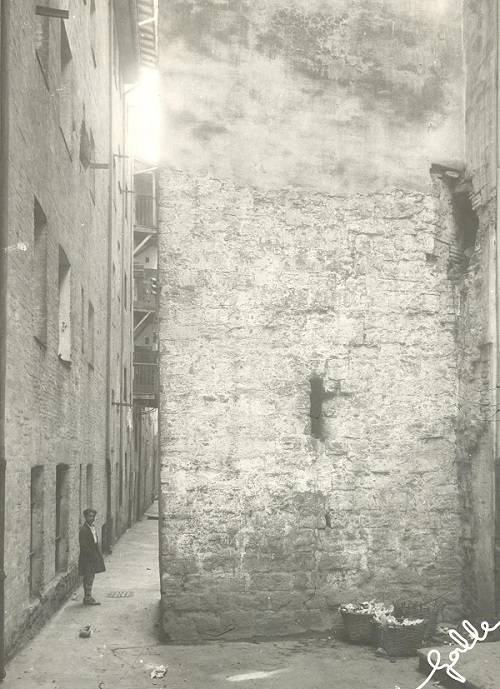 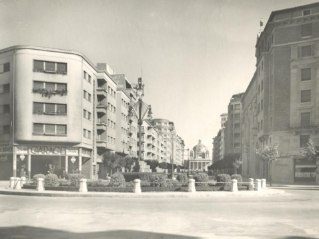 In mediaeval times, the city grew as three distinct communities, each behind its own defensive walls and often in confrontation with one another:

First, what remained of the original Vascon and Roman settlements gradually came to form the city of La Navarrería. Its inhabitants, who were from Navarre; were mostly engaged in farming. The common language was Basque, the only Pre-Indo-European language still spoken in Europe.

Thanks to the Way of St James, many Franks started to come to Pamplona, lured by the advantages that the monarchs of Navarre offered as part of a repopulation policy. And so, the borough of San Cernin or San Saturnino was born. These new inhabitants were mostly craftsmen and merchants, and their chief language was Occitan.

Finally, immigrants from different parts of Navarre and other foreigners formed a third community, that of San Nicolás. As in the case of La Navarrería, its population both farmed the land and worked in trades. Each of these three communities was completely walled and separated from its neighbours by moats or ditches. Their churches were their defensive bastions. In 1276, in the War of La Navarrería, the communities of San Nicolás and San Cernin joined forces against La Navarrería, which was completely razed to the ground. Definitive peace did not come until 8 September 1423 when King Charles III the Noble enacted the Privilege of the Union: the three communities joined to form ‘a single university, a municipal district and indivisible community.’ The Jurería, now the City Hall, was built in what had been no man’s land, where the three boroughs met.

THE CAPITAL AFTER THE CASTILIAN CONQUEST

At the dawn of the 16th century, the Kingdom of Navarre was greatly coveted by the neighbouring crowns of Castile, Aragon and France. To make matters worse, infighting had begun which would eventually lead to civil war between contending lineages in Navarre. Charles III the Noble had created the title of Prince of Viana for his grandson, the future Charles IV, the son of Blanche of Navarre and John II of Aragon. On the death of the prince’s mother, however, John did not allow his son to reign.

As a result, two sides formed: the Agramonteses and the Beaumonteses. John II of Aragon remarried, this time wedding Juana Enríquez, and with her fathered Ferdinand the Catholic. When, years later, Ferdinand allied with the English crown against the French, the monarchs of Navarre chose to side with the latter. Given the situation, Ferdinand, with the support of a papal bull, sent his troops, with the Duke of Alba at their head, to seize the kingdom in 1512. The last monarchs of Navarre, John III and Catherine, Queen of Navarre, fled and moved the Court to their domains on the other side of the Pyrenees to try to recover the kingdom from there. After several attempts, a decisive battle took place in Noáin in June 1521 and the monarchs of Navarre were defeated. The city’s strategic position in relation to France meant that great lengths were gone to in order to fortify the city appropriately with its Renaissance walls and the Citadel.

The 18th century was the city’s golden age. The Enlightenment and concern for new concepts such as social well-being led to substantial improvements in the city: the streets were cobbled, the sewer system was improved and public lighting arrived in the form of candles. But perhaps the most significant project consisted of providing the city with a water supply via the aqueduct of Noáin, designed by Ventura Rodriguez. As a result, Luis Paret y Alcázar, a painter to the Court, could create his emblematic Neoclassical fountains. The century also saw many people leave Navarre, some to the Court in Madrid and others to America. The latter were known as indianos. After thriving, many returned to the city and built magnificent residences for themselves and generations to come.

THE 19TH CENTURY: THE BURGEOIS CITY AND EXPANSION

The 19th century was marked by war: the War of Independence (1808-1814), the Royalist War (1822-1823) and the Carlist Wars (1833-1840, 1872-1876). In 1841 Navarre ceased to be a kingdom, the Pacted Law demoting it to the status of province. This was also when the local bourgeoisie came into being and industrialisation took its first tentative steps. In 1860 the railway reached Pamplona. The 19th century was very important for cultural life. The city could boast the international success of both the violinist Pablo Sarasate and the Roncal-born tenor Julián Gayarre. Significant music institutions were created, such as the Orfeón Pamplonés, La Pamplonesa and Orquesta Santa Cecilia, Spain’s oldest orchestra.

The century also saw a great increase in the city’s population, inexorably at odds with its fortified layout. Overcrowding had turned Pamplona into an unhealthy city. The urgent construction of the first extension of the city called for the demolition in 1888 of the Citadel’s two interior bastions. Although the small neighbourhood created, Primer Ensanche, consisting of just 6 blocks, barely helped solve the housing problem, it did leave us some remarkable modernist buildings. Demolition of the Front of La Tejería, finally enabling construction of the second extension, Segundo Ensanche and expansion of the city to the south, was not approved until 1915. The Taconera Gardens and the Media Luna Park became the favourite places for recreation in the city.

THE CITY OF TODAY

Pamplona and its surrounding district gradually grew to become the city we know today, with a population of 203,000 -350,000 if the metropolitan area is included: a city with its sights firmly set on the future thanks to the significant industrial and service belt which surrounds it. The University of Navarre was founded in the 1950s and the Public University of Navarre in the 1980s. The city’s medical and hospital services are also second to none, with the Hospital Complex of Navarre, which belongs to the Navarre Health Service – Osasunbidea, the University Clinic of Navarre and the Centre for Applied Medical Research (CIMA). Pamplona has a competitive secondary sector, chiefly driven by the automotive, pharmaceutical and renewable energy industries.