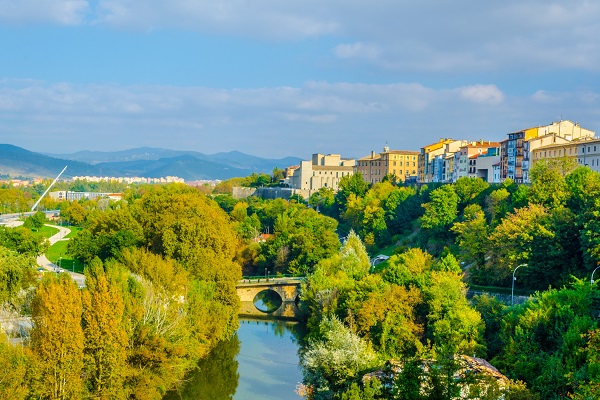 Route: From Sorauren and Irotz to Ibero

The Arga river Park, with its million square metres, constitutes one of the city’s most important green areas. It runs alongside the river, passing the most significant historical bridges: Magdalena, San Pedro (the oldest in Pamplona), Rochapea and Santa Engracia. The meanders wind in and out of the city, carving out a highly valued landscape for walkers, cycle-tourists, and even rowers..

The urban atmosphere inside the city walls contrasts with the recovered local flora and the country setting. Along the walk there are ash trees, willows, alders, limes and blackthorns, creating the perfect country setting just metres from the Navarran capital.

This walk is a good way of observing the city from the outside. It can be enjoyed on foot or by bike, covering the entire route or just parts of it. Its picnic spots are the ideal place to enjoy a day out in the countryside without straying too far from the city.

Riverbanks are the home of many small mammals.

Some birds that overfly the city and live with us

Many nest boxes are scattered in the city’s parks - Taconera Gardens, Vuelta del Castillo Park, Yamaguchi and River Arga Park, to attract birds.
Some are for kestrels, some for scops owls and some for small birds like sparrows.

Route of the Arga River Park