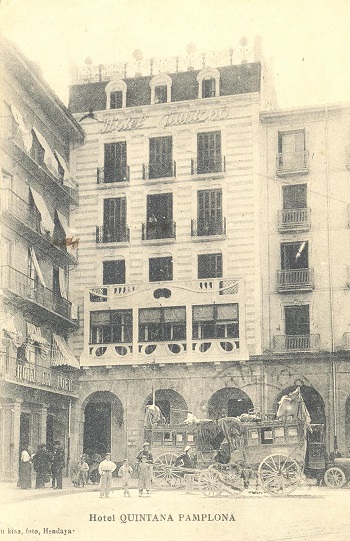 Quintana, the best aficionado and most loyal friend in Spain, and with a fine hotel with all the rooms full. This is how Ernest Hemingway refers in the book ‘Death in the Afternoon’ to Juanito Quintana, owner of the Hotel Quintana (Hotel Montoya in the novel ‘The Sun Also Rises / Fiesta’).

In June 1924, in Madrid, the bullfighting critic Rafael Hernández had recommended that they stay at the Hotel Quintana. That same year they made friends with Juanito Quintana and stayed the last days of the San Fermín festival of 1924 at his hotel. The Hotel Quintana was where the Hemingways and their friends were given accommodation from 1925 to 1931. The owner, Juanito Quintana, was a close friend of Hemingway’s; they shared their fondness for bullfighting and their republican ideology. At the onset of the Civil War, the Hotel Quintana was seized by the Francoist troops.

Juanito Quintana was in Mont-de-Marsan and for a few years he settled in Biarritz, where his brother ran a hotel. In 1941 he requested permission to return and settled in Donostia-San Sebastián. In 1953, according to A.E. Hotchner in ‘Papa Hemingway’, Hemingway meets again in San Sebastián with “his old friend” Juanito Quintana and they return together to Pamplona.

Peter Viertel in ‘Dangerous friends’ explains that in 1953 Hemingway, who had just arrived in Saint-Jean-de-Luz, received a call from Juanito Quintana, “his best friend in Pamplona, perhaps the best in all of Spain”. He also recounts how Juanito Quintana’s republican ideas caused his hotel to fall into Francoist hands and end up closed.

The friendship between Ernest Hemingway and Juanito Quintana is evident in a letter that the writer sent on 23 March 1927 to his publisher asking him to send a copy of the novel 'The Sun Also Rises / Fiesta', issued just six months earlier, to Don Juan Quintana, giving him the address: Hotel Quintana, Pamplona. On 17 June 1927 Juanito Quintana replied to Hemingway, thanking him and saying that “I really liked the novel. I imagine that the character under the name Montoya must be Juanito Quintana, am I right?”

From the room that Juanito Quintana had reserved for him in 1927, Hemingway wrote one of his scarce letters in Spanish still kept. He addresses it to the painter Waldo Peirce, with whom he enjoyed the festival of 1927, and in it he tells his friend how he has divorced his first wife and that this year in Pamplona he will be meeting Pauline Pfeiffer.