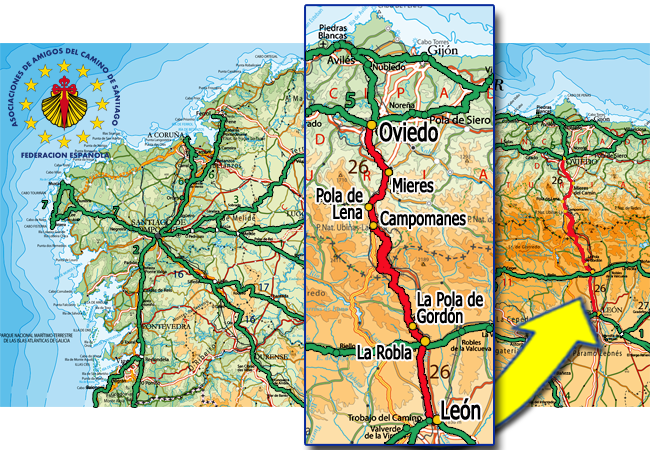 The Way of the Saviour or of Saint Saviour strays off the French Way and heads north towards Oviedo, crossing the Cantabrian Mountains, and later continues to Santiago de Compostela along the tracks of the Northern and Primitive Ways.

The origins of this route date back to the time when Oviedo was the capital of the Asturian kingdom. In fear of Muslim raids, a large part of the relics of border cities were taken to Oviedo. In order to protect them, king Alfonso II the Chaste had a Holy Chamber built within the cathedral complex of San Salvador, thus creating a collection of relics almost as important as the one kept in the city of Rome. Because of this, Oviedo became an important pilgrimage destination. As it turns out, pilgrims coming from the Castilian Plateau, upon reaching León, continued northward, crossed the Pajares pass and then descended to Oviedo, because, as the ancient saying went, “whoever goes to Santiago and not to Salvador (Oviedo) visits the servant (the Apostle) but not his Lord (Christ)."

And that is how the Way of Saint Saviour emerged, connecting León with Oviedo. The route is some 100 kilometres long, a third of which are mountainous, but currently well signposted and lined with pilgrim hostels. From Oviedo, hikers can continue towards Compostela along the Primitive Way or head for the coast to Avilés, and from here, continue along the Northern Way.

The Way of the Saviour is probably the most mountainous route to Compostela and it presents a higher level of difficulty than others, and that includes the Primitive Way, being especially recommended for people used to mountain trekking.

Snow and fog are common in winter in the Cantabrian Mountains. For this reason, it is convenient to keep up to date with the latest weather forecast and to bring appropriate equipment.