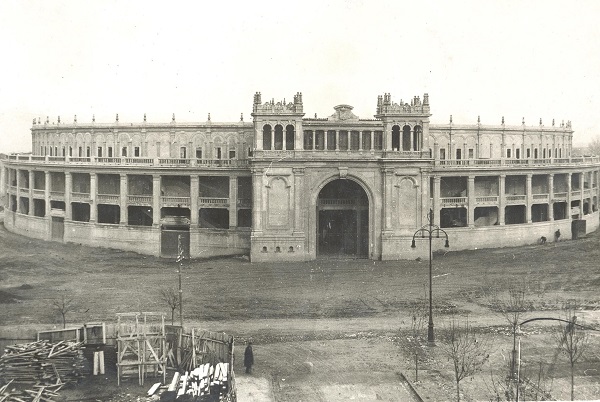 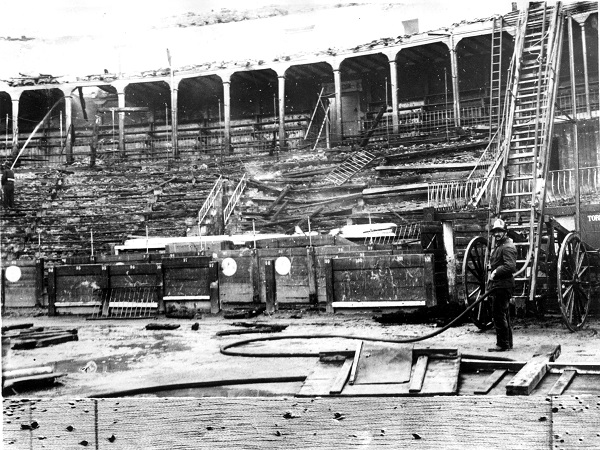 The current bullring was designed by Francisco Urcola and opened in 1922. The extension of the arena was designed in the 1960s by Rafael Moneo. Next to the lane leading into the ring there stands the Monumento to Hemingway, made by Luis Sanguino in 1968.

Near the main entrance is the Monument to the Running of the Bulls, a cast bronze sculpture by Rafael Huerta which freezes an instant during the run.

In his article published on 27 October 1923 in the ‘Toronto Star Weekly’ Hemingway described the early morning of the 7 July of that year, during the first Sanfermines of the American writer: “We followed the crowd that was leaving through a narrow gate on the walls towards a yellowish, flat and empty field, where the new and white bull ring stands: it was packed. Once the bulls have been locked in their pen, the aficionado bullfight – vaquillas, begins”.

Hemingway even participated in the vaquillas bullfight in 1924. In his letter dated 19 July 1924 he sent from Burguete, he gives his account of his adventures in the bull ring: “I appeared at the bull ring on five different occasions– I was gored three times, and I managed to engage in four good veronicas and one natural with the muleta; on the last morning, I got bruised in the chest”. In fact, Hemingway received media coverage as he was knocked down at the ‘vaquillas’. In Pamplona he met again with painter Ignacio Zuloaga, who told journalists how several Americans had played a leading role that year at the vaquillas in the bull ring.

By late 1924 Hemingway was already getting ready for the next fiestas, starring the “matadors Howell Griffiths Jenkins and Ernest Hemingway de la Mancha on behalf of the Sotck Yards of Chicago”.

The Bull Ring of Pamplona is mentioned in ‘The Sun Also Rises/Fiesta’, ‘Death in the Afternoon’ and ‘The Dangerous Summer’, where he defines it as “high and white and concrete-looking in the sun”. The current bull ring was built following a Renaissance-style design, and was inaugurated on 7 July 1922.

Open for groups, only by reservation.

Visiting hours with a guide: Check timetables on the website www.feriadeltoro.com. Online reservations.

Guided tour: Visitors' approach to the life of the bull, a morning of confinement or an afternoon of bullfighting in the plaza, the corrals, the stables, the chapel, the waiting room or the horse yard.

TOUR OF THE VISIT IN 5 STATIONS: