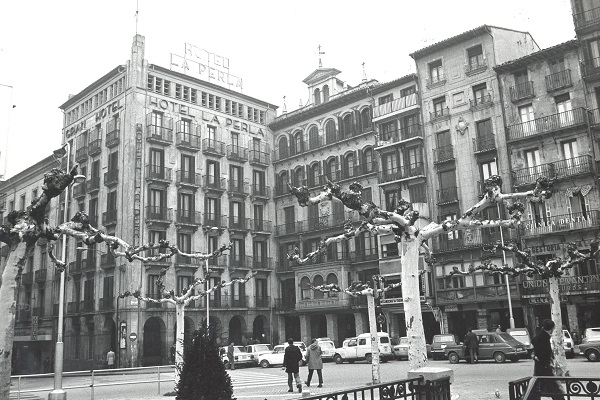 The Hotel la Perla was first opened in 1881. It is one of the oldest hotels on the Peninsula.

The Hotel La Perla was precisely the first accommodation that Ernest Hemingway visited on 6 July 1923. As the writer explains in his article published in the 'Toronto Star Weekly', “two weeks in advance we had requested by telegraph and by letter to reserve two rooms for us. But we found that they had not been reserved. They offered us a narrow room with a bed that overlooked the kitchen patio”. After a heated discussion, the owner of the hotel offers them to stay in a private house that rented rooms and that was owned by the Ayestarán Bidegain family, who that year had entered into an agreement with the Hotel La Perla. .

In her book 'The Hemingway Women', author Bernice Kert recollects an interview with Hadley Richardson, Hemingway's first wife, in which she explains that on 26 June 1924 they returned to Pamplona to enjoy the San Fermín festival and that they stayed at the Hotel La Perla, where they had a reservation. Indeed, during the Sanfermines of 1924 Hemingway and his group of friends stayed at the Gran Hotel La Perla. In fact, Ernest himself wrote a letter from the Hotel La Perla to Gertrude Stein in which he gave his account of the San Fermín festival that year.