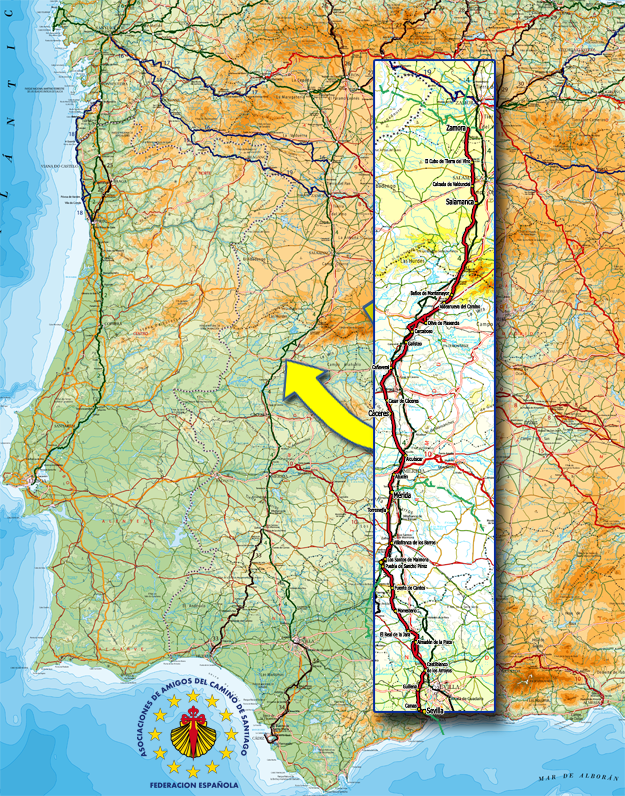 The Silver Way is one of the most important Ways of Saint James in the south of the peninsula. It starts in Seville, runs across Badajoz, Cáceres, Salamanca and Zamora and arrives in Astorga, in the province of León, where it joins the French Way.

The great heritage and cultural wealth that it offers make this route an alternative whose number of pilgrims is increasing by the year. The extensive pastures and large crop fields we will find during the long treks between rather distant localities are its scenic highlights.

Ancient Roman causeway between Augusta Emerita (Mérida) and Asturica Augusta (Astorga), the Silver Way was the main north-south communication axis of Hispania and, later, the route used by pilgrims from all over Andalusia and Extremadura. Its approximately 700 kilometres are full of history and heritage, whose starting point nowadays is Seville.

It became increasingly popular among the Mozarabic Christians (who lived in Muslim territories) when, in the 10th century, Muslim knight Almanzor looted the Cathedral of Santiago and brought the bells and doors with him to the Mosque of Córdoba – on the backs of Christian prisoners. Later, the returning of the bells and the successful advance of the Christian troops towards the south encouraged pilgrims to take this way.

In summer the temperatures here are extreme, especially in the territory between Seville and Salamanca. It is therefore not advisable to take this route between June and September. The ideal months to do it are March, April, May and October.

Although more austerely than the French Way, the route is well signposted and yellow arrows abound along the journey. In addition, the slopes are gentler compared to other ways and a good part of the route is cyclable.

It has a good network of hostels and other accommodation options.