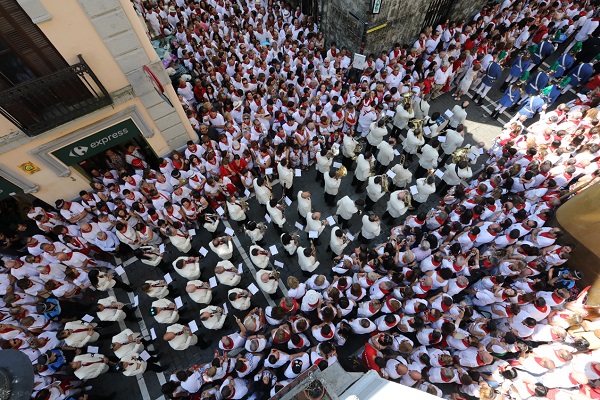 La Pamplonesa Brass Band was created in 1919, after Mr Silvanio Cervantes, Mr Manuel Zugarrondo and Mr Vicente Sádaba suggested to the City Council the advantages of forming a civil band for the city. Their argument was that previous bands responsible for playing music in the San Fermín festivities, were military bands and were generally not well received by the public. This lack of connection between the public and music bands led by military figures, was the reason they disappeared in 1917.

The main duty of La Pamplonesa is to provide musical accompaniment to the corporation in all its official acts held, and it is also in charge of playing the “Diana” chimes that proceed the bull run each morning.

Today, La Pamplonesa is a vital part of the festivities and receives the affection and support of the people; proof of this are the Diana chimes, in which the complicity between the Band and the public create the buzzing atmosphere that makes this a truly unique event.