Pamplona and The Sanfermines 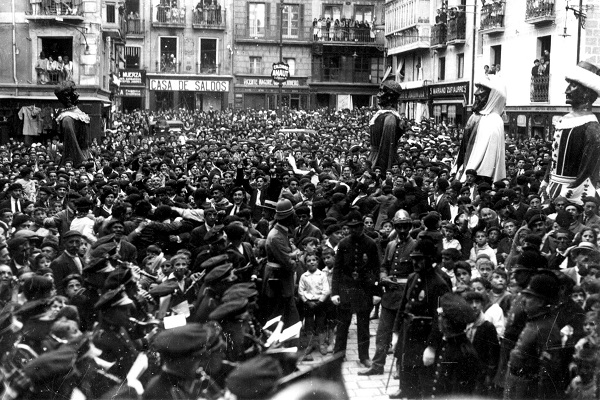 Ernest Hemingway and his first wife Hadley Richardson (pregnant with their first child) arrived in Pamplona for the first time on 6 July 1923. They came because the writer Gertrude Stein recommended the city for them to have a second honeymoon. In the letter that Hemingway sent on 20 June 1923 to his mother, Grace Hall, Hemingway told her that he and Hadley were very excited about going to “Pampaluna”. He explains that they will leave Paris on 5 July at 10:30 am and will arrive in San Sebastián around 10:00 pm and the next day they will leave for “Pampaluna”. He tells her that it is a "beautiful little town located in Navarre, next to the French border”. In the following letters he spells “Pamplona” correctly.

The Civil War, his commitment to the republican cause and his opposition to the Francoist dictatorship got him declared “persona non grata” by the dictator – and his books censored for decades. In 1953 he was given the chance to return – which he did. Ernest Hemingway was very certain that the happiness he felt in Pamplona could not be found anywhere else in the world.

In Pamplona and Navarre, Hemingway, his family and friends found a unique place in the world, where they could enjoy a “fiesta” previously unknown to them. On 6 July 1923, at the age of 24, Ernest Hemingway undertook a vital journey in Pamplona that would change him for life.

The young writer in the making and experienced journalist is surprised by how the people of Pamplona are and the joy he finds in the city streets. The kindness and generosity of locals is reflected in ‘The Sun Also Rises / Fiesta’ when Hemingway puts the words “these Basques are great people” in Jake Barnes’ mouth, as they hop on a bus at the Plaza del Castillo.

On 18 July 1923, Hemingway wrote a letter to William D. Horne where he explained that “We have just returned from Pamplona, we’ve had the best week of our lives… from the great Feria in Pamplona- 5 days of bullfighting, dancing all day and all night - wonderful music - drums, flutes, fifes – the faces of Velázquez’s drinkers, of Goya and El Greco, all the men wearing blue shirts and red neckerchiefs that seemed to fly in circles while they danced… ”

On 27 October 1923 Hemingway published his first Pamplona chronicle in the Toronto Star Weekly, in which he described the San Fermín festival. "Streets with the madness of a carnival”. "Crazy carnival whirlwind”. "No carnival can compare to these parties”. In this article he states that "Pamplona is the funniest place you have ever been seen".