“THE CHUPINAZO” AND “THE POBRE DE MÍ” 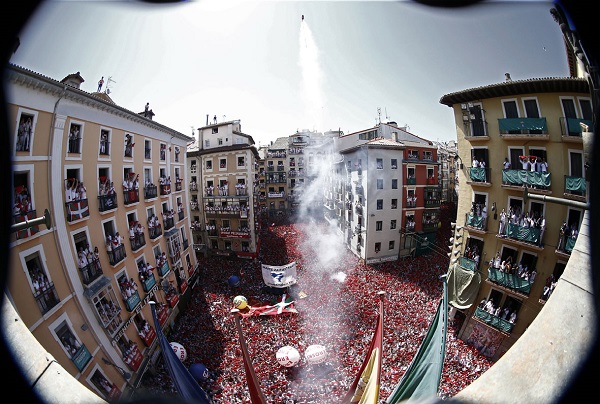 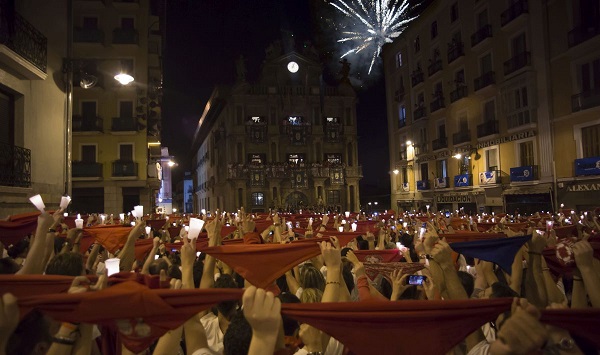 The Chupinazo is the rocket launch that announces the start of San Fermín festivities. The signal that everyone awaits impatiently to tie their neckties to their necks and start the nine intensive days of non-stop festivities.

It is an act attended by many people and the City Hall plaza is not as big as it seems. For this reason, and to offer an alternative to anyone that wants to follow the Chupinazo without the crowds, the City Council places giant screens in Paseo de Sarasate, Plaza de los Fueros and Antoniutti Park.

Each 6th July the Plaza Consistorial fills with people, and as the clock hands draw closer to 12 noon the crowd becomes increasingly lively, until several minutes before the awaited time, no-one else can fit in the plaza and the 2,502 square metres of the plaza become a sea of people dressed in white and red that waits patiently shouting of “San Fermín, San Fermín!” and necktie held high, for the moment it can worn..

Three minutes before noon everything is already prepared. All that remains is for the clarinet players to announce the appearance of the person that will launch the rocket, who gives the traditional greeting to the public in Basque and Spanish “Viva San Fermín, Gora San Fermín”, just before lighting the wick that leads to the explosion of festivities and happiness that spreads to every corner of the city for the next nine days.

The launching of the Chupinazo rocket from the City Hall balcony is a relatively modern tradition, which dates back to 1941. Prior to this, the start of the San Fermín festivities were heralded from the Castillo Square. The oldest dating reports about this event are from 1931, and they speak of Juan Etxepare, a tobacconist from Calle Mayor, who was the first person to ask the City Council for permission to launch rockets from the street on 6th July at 12 noon.

Traditionally the honour of launching the Chupinazo was reserved for mayors and council members, or someone with standing designated by the City Hall. However, since 2016, the way this honour is designated has changed, with Pamplona citizens choosing who launches the Chupinazo, through a participative process and popular voting of the candidates put forward by citizens’ associations.

It is time for the last official event of the fiesta, the Pobre de Mí (Poor Me), which brings the festivities to an end to the sound of the chant “Pobre de mí, pobre de mí, que se han acabado las fiestas de San Fermín” (Poor me, poor me, the Festival of San Fermín has ended).

Their kerchiefs still knotted and carrying lit candles in their hands, the thousands of people who congregate in front of the City Hall await the moment when the Mayor comes out onto the balcony to address the public, officially bringing the festival to a close and asking everyone to come back in a year’s time for their next appointment with the Chupinazo. Not long to go.