Troupe of Giants and Bigheads 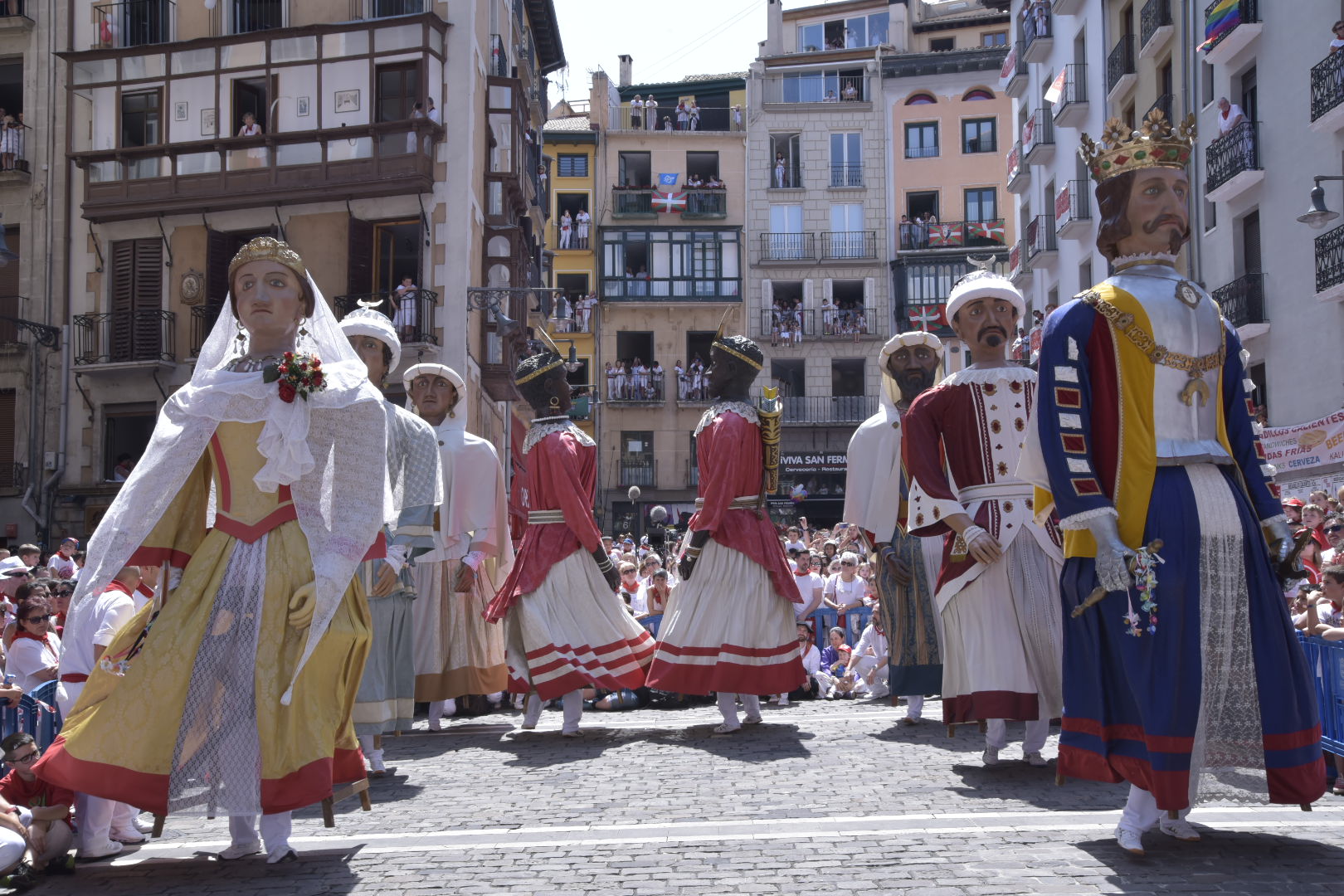 The Troupe of Giants and Bigheads is one of the most charismatic parts of the San Fermín festivities. The popularity and affection they have earned over the years among the public has transformed the characters into undeniable symbols of the fiestas.

Although the oldest references to the existence of a Troupe of Giants and Bigheads in Pamplona is linked to the 16th century, the one we now know dates back to 1860, comprising 25 papier mache figures that give life to a flamboyant company formed of Bigheads, Kilikis, Giants and Zaldikos, which, accompanied by pipers and txistu players, parade the streets of Pamplona each morning.

The parades take place comprise Bigheads, Kilikis and Zaldikos that lead the way for 8 towering 4-metre high figures, which represent the four couples of kings and queens: European, Asian, African and Afro-American. Each giant is followed by a band of pipe players, apart from the last figure, the Afro-American queen, who is followed by txistu players.

The Giants of Pamplona are kept in the new Bus Station and can be visited by groups of schoolchildren. During the San Fermín festivities, they are kept in the Ezpeleta Palace.

First are the Bigheads, characters wearing large heads and that represent the authorities. Their only job is to be present, walk around, and shake hands with anyone that wants to.

The Kilikis also wear large heads and they are armed with foam rods. They chase and hit children with the foam rod, who normally tease them (the word “kiliki” comes from the Basque language and can be translated as “prod” or “provoke”).

Along with them are the Zaldikos (Little horses in Basque), which like the Kilikis, are armed with foam rods which they use to hit people. There are 6 horses and horsemen, and they are the only characters without names. They are numbered from one to six.

Finally are the Giants, who with their magnitude, dance to the music, offering rhythmical movement, spectacular spins and soaring clothes in a beautiful show of colour and sound. The first couple is Joshemiguelerico and Joshepamunda, followed by Sidi Abd El Mohame and Esther Arata, then Selim-Pia El Calzao and Larancha-la, and finally, the American couple, Toko-Toko and Braulia.

Each Giant during the parade of the Giants and Bigheads is inevitably accompanied by two “gaita” players and a tambourine, with the exception of the black queen, who is accompanied by a couple of “txistu” and tambourine players.

EVENTS IN WHICH THEY PARTICIPATE

The Privilege of the Union, 8th September.

Quantity: 8 (each pair represents a continent).

They differ from the bigheads in that they are smaller and have a tricorn-shaped cap.

Click here if you want to know them all.