History of the French Way

THE ORIGIN OF THE FRENCH WAY

Although the Northern Way and the Primitive Way were the first pilgrimage routes to Compostela, the French Way began in the 11th century to become the busiest route. It is no coincidence that this happened, considering that king Sancho III the Great of Navarre and king Alfonso VI of León decided to exploit the existing route of the Roman causeway from Astorga to Bordeaux, modifying the itinerary to reinforce the border between the Christian and the Muslim kingdoms of the Peninsula following the recent conquest of these territories.

The creation of new towns along the route triggered a pull effect, attracting new Frankish settlers and bringing artisans and merchants, thus enriching the economy of these recently founded towns and promoting their development. This network of new infrastructures, at the same time, facilitated the transit of pilgrims from all over Europe. The result was spectacular in terms of social, economic, artistic and cultural development.

The reputation of the route grew even more popular since the 12th century, when the French monk Aymeric Picaud wrote what is considered the first guide to the Way of Saint James: the Codex Calixtinus. It describes in detail the route, the starting and end points of the stages, the sanctuaries to visit, the hospitals for pilgrims (current hostels), the character of the people of each locality and the customs of each territory.

It is called the French Way because it is the merger of four main pilgrimage routes that run through France, namely: the Turonensis (from Paris, passing through Tours), the Lemovicensis (from Vézélay, passing through Limoges), the Podiensis (from Le Puy, passing through Cahors) and the route from Toulouse (starting in Arlès). The first three converge at Saint-Jean-Pied-de-Port, while the fourth crosses the Pyrenees through Somport and joins the other three in Puente la Reina.
From Puente la Reina, the French Camino maintains a single itinerary that runs through significant towns and cities across the north of Spain, such as Estella, Logroño, Santo Domingo de la Calzada, Burgos, Castrojeriz, Frómista, Carrión de los Condes, Sahagún, León, Astorga, Ponferrada and Villafranca del Bierzo. After the territory of El Bierzo it enters Galicia, running through Sarria, Portomarín, Palas de Rei and, finally, reaches Santiago de Compostela. 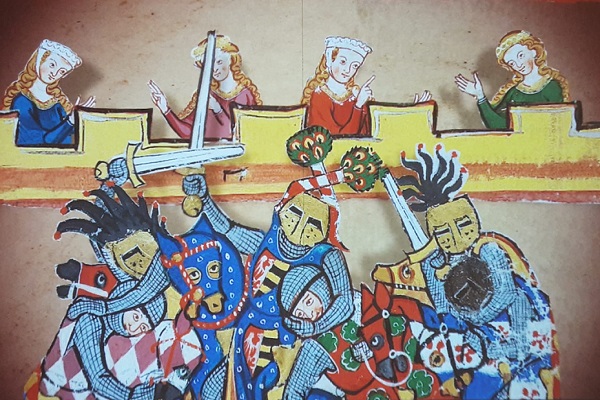 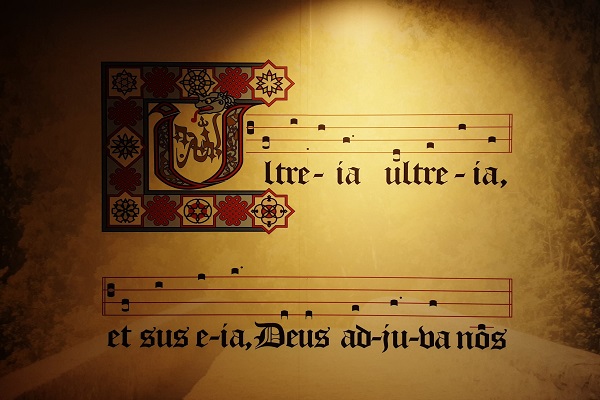 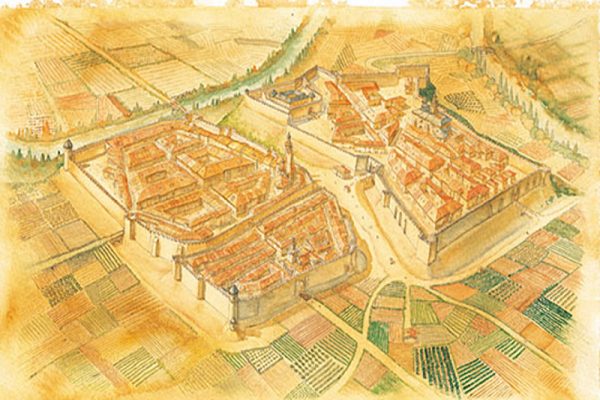 EVOLUTION OF THE ROUTE 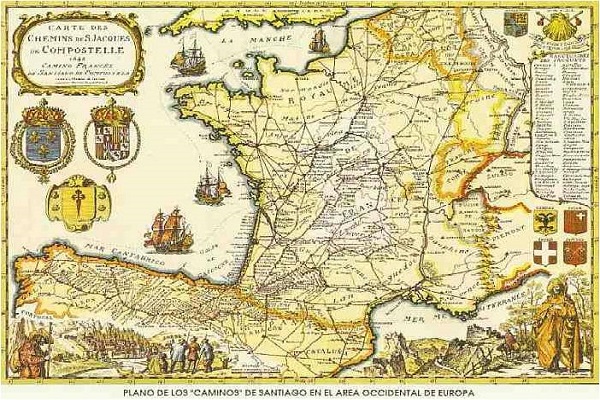 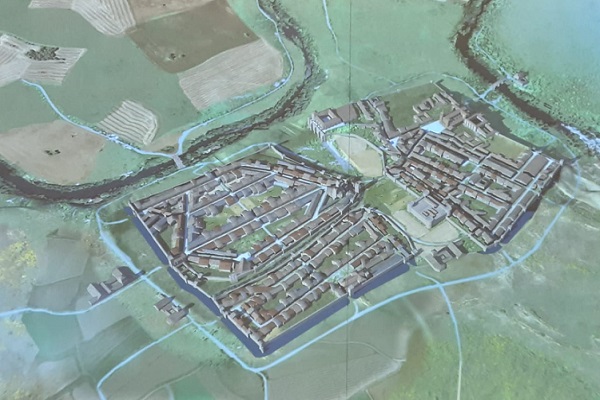 Since the onset of the layout of the itinerary, the best already designed and built route to that date was exploited: the Roman causeway Ab Asturica Burdigalam, that is to say, the road that connected Astorga with Bordeaux. Although the stone slabs were disappearing as they were being reused or covered by layers of dirt, the track was already made. Thus, at the Ibañeta Pass there was already an old Roman “mansio” (hostel) that was occupied by the first pilgrim hospital established in Roncesvalles.

After passing the Summo Pyreneo, the road went down to old Pompaelo, which at the time was divided into three “burgos” (townships) confronting one another but still becoming richer thanks to the passage of pilgrims.
The main difference between the route followed by pilgrims during the 9th, 10th and 11th centuries and that of the 11th century onwards was the change of the track between Pamplona and Burgos.

The old route left Pamplona and headed directly for the Sakana valley, passing through Irurtzun, Uharte-Arakil, Salvatierra, Vitoria, Miranda de Ebro and Briviesca until it reached Burgos. It was Sancho III the Great, king of the then Kingdom of Pamplona, who diverted the route, redirecting it through the El Perdón Pass, Puente la Reina, Estella, Viana, Logroño, Nájera and Santo Domingo de la Calzada, finally reaching Burgos .

Map of the north of the Iberian Peninsula in 1035. The advance of the Christian kingdoms made it possible to control the entire route of the old causeway to Bordeaux. The classic itinerary of the Way of Saint James was planned based on this and following several other diversions.