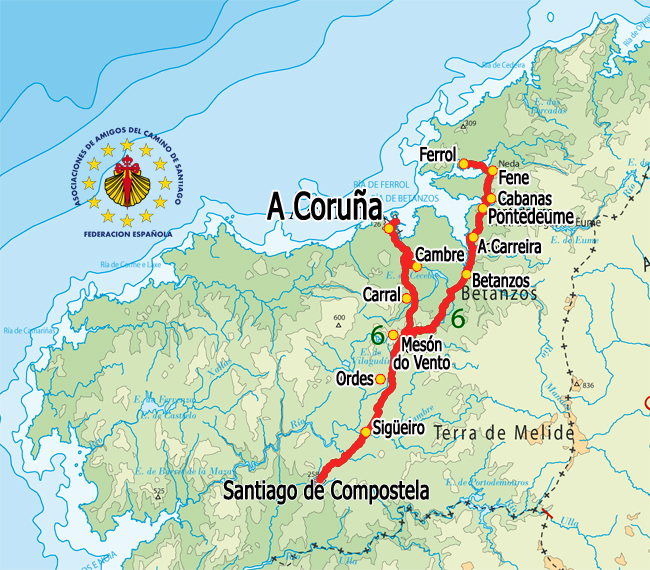 STARTING POINT: A CORUÑA or FERROL

The English Way is the Jacobean route that starts from the port cities of Ferrol and A Coruña and ends in Santiago de Compostela. These two alternative routes come together in Bruma, 43 kilometres from the Galician capital.

It is a short route, ideal for those who do not have much time. The greenery is ever-present and the track is far from being crowdy, although the number of pilgrims is increasing by the year.

The English Way emerged in the Middle Ages as it was a strategic point for commercial and passenger transport that allowed pilgrims from northern Europe to board ships with the intention of visiting Santiago de Compostela. Many of these pilgrims came from English ports, giving the route its name. It was in the mid-14th century, with the trade currents of the time, that navigators began to become pilgrims too.

By the nineteenth century the route had already been forgotten, but during the 1990’s, several cultural bodies and friends of the Way brought it back to life. After studying the layout, signposts were erected and then the first hostels began to open.

Both branches are well signposted – with yellow arrows and the usual well-located milestones.

In the light of the growth that this route is experiencing, the number of hostels has multiplied in recent years. There is also a large number of conventional accommodation options along the route.

The route is relatively difficult compared to the rest of ways and it is suitable for doing it riding your mountain bike.