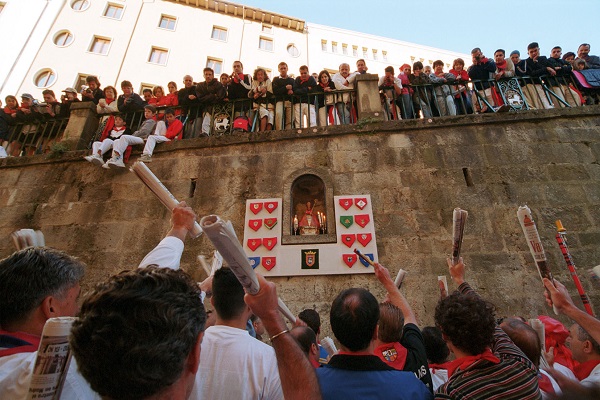 Being 280 metres long and having a 10% slope, the Cuesta de Santo Domingo (literally, the “slope” of Santo Domingo), the first stretch of the Running of the Bulls, is probably the best-known event of the festival of San Fermín – and the one arousing the most interest on a global scale. It amounts to almost one third of the 850-metre track of the Running.

The bulls come out of a corral located in an old bastion of the walls, the Corral de Santo Domingo. This is considered the most dangerous section of the Running, as it is where the bulls run the fastest, since they have just begun running and they take a run-up as they gain momentum. In addition, in the last section of the Cuesta, before reaching the Plaza Consistorial, there is nowhere for runners to take shelter.

In the lower part of this first section, we find the niche with the image of San Fermín, patron saint of the festival. Minutes before the start of the Running, the runners -or mozos- sing the same song several times to ask for protection: “A San Fermín pedimos; por ser nuestro patrón; nos guíe en el encierro; dándonos su bendición” (“We ask San Fermín; as he is our patron saint; to guide us in the running; giving us his blessing ”).

There is some confusion regarding this chant. This is so because the authors and those who made it world-famous are not the same people. The authors were a cuadrilla from Pamplona, who composed it in the 50’s, but it was a local band – Los Iruña’ko, who made a cover of it in 1954. The tune gradually became more and more famous until it ended up being the anthem for the runners.

THE CAPOTICO CAPE OF SAN FERMÍN

A “capotico” is a small cape covering the statue of San Fermín in its chapel and the small 50-cm statue in the niche before which runners sing for protection before each running.

There is a saying that ‘echar un capote’ (literally, to give a cape) actually means to help someone. Thus, San Fermín’s cape would miraculously help runners in difficult situations during the running. That is why both believers and non-believers ask for the saint’s protection as they run before six loose wild bulls.