History of the walls 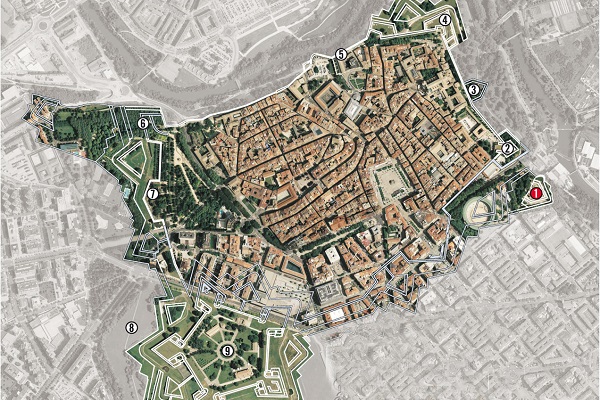 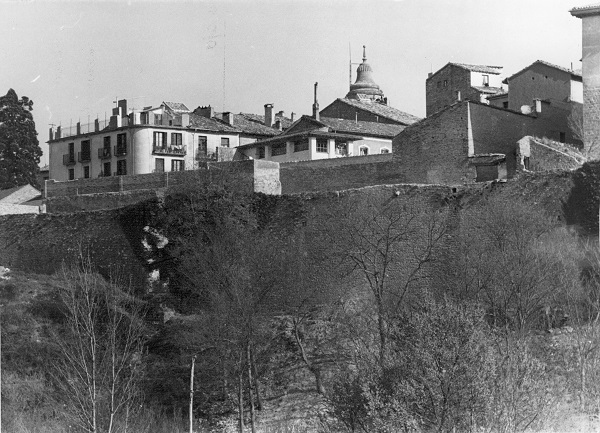 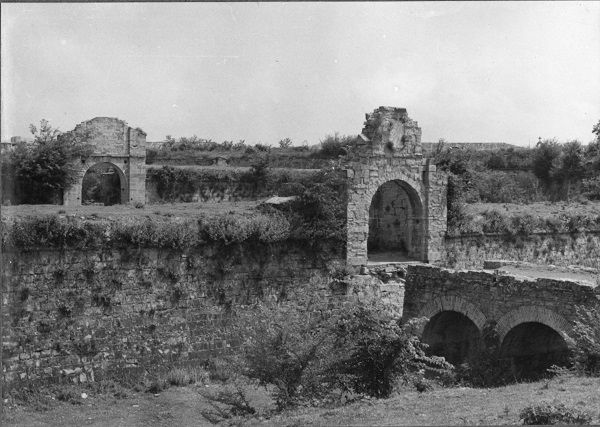 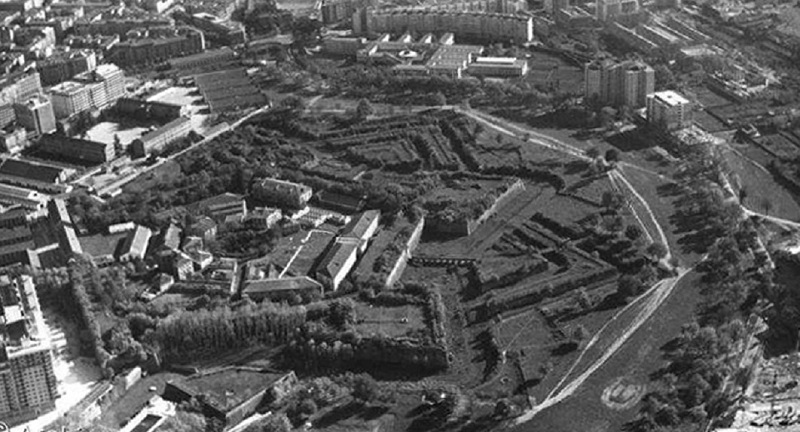 In 1512, Fadrique Álvarez of Toledo, Duke of Alba, at the helm of the Castilian army, conquers Pamplona – unified following the Privilege of the Union of 1423. The city comes under the control of Ferdinand the Catholic without putting up any resistance. In the name of the King, the Duke promises the people of Pamplona that their fueros (special privileges) and customs will be preserved. In the same year (1512), a few months after the Castilian conquest of the “head of the kingdom of Navarre” (Pamplona), a powerful Franco-Navarrese army of 15,000 men besieges Pamplona in an attempt to try and recapture it. They fail in their attempt. This attack makes them see the need to improve the city’s defences: in 1513, they start to build the fortress or castle of Santiago.

On 19th May 1521, Pamplona capitulates to an attack by a French contingent of 12,000 men, also backed up by Agramont troops. However, the Castle of Santiago continues to resist, with the Castilian army of Emperor Charles V inside. The French position their artillery inside the city and attack the castle from it Mayor Herrera, inside the castle, does not hesitate to open fire on the population, wreaking havoc. Ignatius of Loyola, gentleman of the Duke of Nájera, is seriously wounded in his right leg while helping to defend the castle. The French will go on to demonstrate their overwhelming superiority in terms of artillery by breaching its walls, which results in the capitulation of the Castilian army. Pamplona’s defences, especially the castle, are seriously damaged.

When war broke out in 1542 (Italian War 1542-1546) the Emperor entrusts the Duke of Alba with the reconstruction of several fortresses, among them that of Pamplona. He is accompanied by the much-respected engineer, Luis Pizaño, an eminent figure in the construction of Spanish fortifications. The following improvements are made as a result of his visit: the number of bastions is increased and casemates are added to them in order to house more pieces of artillery, the old medieval towers are demolished, embrasures are opened and parapets are built. The walls are made sloping and thicker, gateways are closed and any obstacles or dominant points that could put the fortification in jeopardy are demolished, such as the tower of San Nicolás, which was knocked down around this time. The price for its demolition amounted to the cost of a set of full regalia in crimson velvet.

Despite the improvements, the engineer Juan Bautista Antonelli issues a very negative report in 1569 about the defensive possibilities of Pamplona. A “very major castle” needs to be built. In accordance with Antonelli’s report, Philip II entrusts the most respected engineer of the time with the design – Jacobo Palear Fratín. In 1571, the layout of the new Renaissance castle is ready: the Citadel. Work would last more than 30 years.

For Philip II, the design of the fortifications of Pamplona is of paramount importance. One of his finest military engineers, the Italian, Giacomo Palearo (Jacobo Palear) – known El Fratín – is entrusted to carry out the project to fortify Pamplona “in the modern style”. To do so, he imitates the pentagonal fortresses built in Turin and Antwerp. In 1571, Viceroy Vespasiano Gonzaga, a learned man and a great authority on the art of attacking and defending military fortresses, lays the first stone.

At the end of 1588, Tiburcio Spannocchi is in Pamplona. He is one of the great experts of Philip II (who reigned between 1556 and 1598) on fortifications. He suggests improvements both in the Citadel and in the walled complex, which he embodies in a scale model. King Philip II and his son, Prince Philip, visit Pamplona in 1592 to swear the oath of allegiance to the Fueros del Reino (Special Privileges of the Kingdom) and also to inspect the Citadel in person and check the state of the work. He gains a very high impression of it. In 1601, Spannocchi is appointed “Chief Engineer of the Kingdoms of Spain” by Philip III, which means the overseeing and supervision of all fortifications of the Mother Country and Overseas.

Although work on the Citadel is deemed to have been completed by 1645 once the five outer crescent fortifications have been finished, the defences will continue being improved throughout the 17th and 18th centuries. Soon after 1645, the crescent fortifications – for instance – are considered to be too small and also lack lining, which is why it is proposed that they be expanded and encased (line them externally) using blocks of stone.

On the other hand, the garrison on the inside of the Citadel is deemed to be insufficient. On 23rd April 1646, King Philip IV arrives in Pamplona with Prince Balthasar Charles. From this visit remains the famous painting by Martínez del Mazo, featuring the retinue stopped in front of the main gateway to the Citadel. The greatest change to the Citadel subsequent to its construction is the creation of two counterguards facing the countryside: that of Santa Clara and that of Santa Isabel. Built soon afterwards, they are the work of the engineer, Esteban Escudero, whose report dates from 1685. The coat of arms of Viceroy Enrique Benavides is carved on these defences.

The year 1726 is an extremely important milestone in the history of Pamplona: the engineer Jorge Próspero de Verboom will deliver a general project for the Citadel and for the Plaza (the city’s enclosure) which will be continued throughout the 18th century.

Verboom, one of Vauban’s disciples (the French engineer who took the bastioned fortification of the 17th century to its utmost perfection), creates a double enclosure of fortifications in the most exposed parts using advanced techniques that could be defended from the main enclosure and mutually flanked. His aim: to delay the work of the besieger. With his project, he also achieves a balance between the strategic importance of the fortress, the financial means available to those who had it at their disposal and the garrison needed to defend it. Pamplona takes on its present-day layout: the two ensanches (urban expansion areas) have been built. To alleviate overcrowding and the lack of hygiene in the walled Pamplona, the latter needs to grow beyond the fortified complex.

In 1888, the bastions of La Victoria and San Antón are demolished, in addition to the ravelin located between them. The First Expansion Area (Primer Ensanche) is built. From 1918 to 1921, demolition work is carried out following the symbolic commencement of the latter in 1915: fortifications from the Citadel to the Labrit Bastion are removed. Their disappearance makes the layout and construction of the Second Expansion Area (Segundo Ensanche) possible.

The Citadel was handed over to Pamplona City Council by the Army in 1964. The official handover took place in 1966 marking the start of a recovery and restoration period for the fort. Thanks to this work, Pamplona’s Citadel was declared a National Historic Landmark in 1973.

Moving forward to the 21st century, Pamplona City Council promoted an ambitious plan to restore and preserve its fortifications, supported by the Government of Navarra’s Príncipe de Viana Institution and the Spanish Government’s Ministry of Culture.

From 2005 onwards, work focussed on restoring and preserving the fortifications while making them accessible for people with limited mobility. Among the vast amount of recent work carried, we might mention building the new underground Bus Station, inaugurated in 2007. This was a landscaping milestone as it involved combining modernity and tradition given that, thanks to its completion, the Santa Lucía ravelin once again saw the light of day and much of the Citadel’s glacis was recovered as a green area after having been used as a surface car park.

The Pamplona's Fortifications Interpretation Center was opened in March 2011, located in the recently restored San Bartolomé Fort. The same year saw completion of restoration work on the St Ana and St Isabel ravelins, in addition to the Puerta del Socorro, thereby completing the Citadel’s outer defence rehabilitation. The Labrit rampart was restored between 2013 and 2014. Along with the Redín rampart, this is the oldest part of the walled enclosure.

This decade has therefore been fundamental for Pamplona’s fortified enclosure and it might be said that, right now, it has practically all been restored. The extraordinary effort to recover, restore, rehabilitate and breathe life and activity to Pamplona’s fortifications was recognised with a double award in the 2012 edition of the European Union Cultural Heritage Awards – Europa Nostra Awards: an award in the preservation category and the special public award.