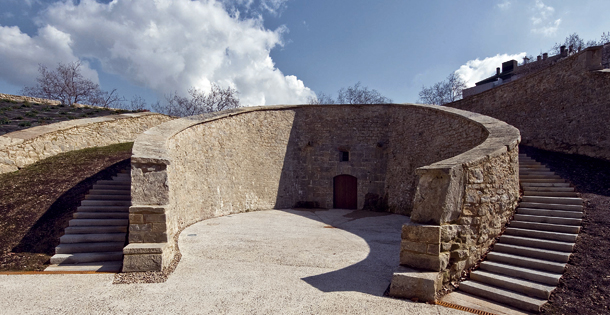 Observation Post
Mound situated between embrasures so the artillery chief could climb up and indicate exactly which way to fire the cannon.

Parade ground
Open area inside a walled enclosure used for the changing or formation of troops. Below the parade ground there could be a lower ward that was used for the same purpose.

Plaster
Layer of gypsum, stucco or other mixture put over the walls of a house to give it a smooth surface.

Platform
The top of a bastion.

Poliorcetics
Set of techniques and approaches for the taking and defending of strongholds. The art of siege warfare.

Portcullis
Barred gate made of iron to defend the entrance to a fort or other parts of the walled enclosure. Also, steel part with grooves in the rock of flintlock firearms; by banging into the flint it ignited the flashpan.

Porthole
Opening in the parapet of wall or at the back of the battery for safe and accurate firing of cannon.

Position
Topographical position of a fort.

Postern
Secondary, small door to a fort, used for discreet entrances and exits to surprise the enemy or regroup the troops in the moat.

Pound
To attack and destroy with artillery.

Pound (Ib)
Old measurement of weight in Castle, where the pound was divided into 16 ounces. In Aragon, the Balearic Islands, Catalonia and Valencia it had 12 ounces, 17 in the Basque country and 20 in Galicia and other quantities in other towns.

Ravelin
Semicircular outwork with two faces at a salient angle built beyond the curtain wall, the two demi-gorges of which constitute the counterscarp. Allows the curtain wall, access points and flanks of a bastion to be protected. Also called a “half moon”.

Redan
Protruding angle formed by a face and a flank adjacent to a bastion. A bastion has two redans.

Ricochet fire
Method of firing cannon in which the amount of powder is reduced so there is less tension in the shot, thus making it possible te attack soldiers in the covered walkway. The battery of cannon was lined up with the covered walkway and the shells fell on the line, rebounding on the floor and the parapet. Invented by Vauban in the last quarter of the 17th century.

Rifle
Portable firearm for the infantry replacing the crossbow and the blunderbuss. Made up of a steel or iron barrel, usually some eight to ten centimetres long, and a firing mechanism joined together at the breech.

Rowlock
Brick laid on the long, narrow side with the small or “header” side exposed.

Salvo
A salute given by firing guns. A series of cannon explosions but without a projectile to honour or salute someone. Simultaneous shot from several identical pieces of artillery.

Sap
Advance by the besiegers protected by their galleries or trenches which they have dug themselves, or under the shelter of the besieged fortification.

Sentry Box
Small hollow space for the shelter and defence of sentries, usually covered and with loopholes. Appeared and developed with bastioned fortification.

Sentry wal
In mediaeval fortresses, the continuous passage around the exterior perimeter of the walls for the purposes of vigilance and shooting.

Shot
Direction a firearm shoots in.

Sleeper Wood or Mudsill
Static part of the floor of a bridge just before the drawn part, the length of which was usually insufficient to reach the scarp of the moat to be crossed.

Slope or gradient
Imaginary sloping line that joined the embrasures to the glacis and other parts of the fort and showed the areas under attack from those embrasures. The same thing could be done from the batteries attacking the fort.

Stockade
A row of stakes hammered into the ground vertically about 5 cm from each other, secured with horizontal strips. They were placed on the banquette of the covered way, in trenches and elsewhere.

Stonework
Any construction or part of it (wall, vault, etc.) made with stone or bricks and mortar. Also called stonework if they were made of adobe.

Swab
Instrument consisting of a long stick with a bristled cylinder at one end, used for cleaning the barrels of firearms.