Ultreia has been designed as a universally accessible centre and is tailored to meet the needs of all users. The centre showcases the historical period of the Middle Ages in the general context of the Way of St James and particularly that of Navarre.

The minstrel Arnaut Guillén de Ursúa, also known as the blind citole and vielle player, serves as its narrator, particularly in section 5. He was a minstrel who served Charles III the Noble from 1412 to 1421. He recounts the experience of a mediaeval pilgrim as he makes his way over the Pyrenees to Pamplona and over the other stages in Navarre.
Mention is also made of Charles III in several of the sections given that, as a prince, he too made the pilgrimage to Santiago de Compostela.

Consequently, the contents of the centre are contextualised in mediaeval times, focusing on the reign of Charles, the unifier of the city of Pamplona. In order to do this, the trades, clothes and food of the time were all studied, as were the structure of the king’s household, the characters who made up his court, the society of the day and how it was organised, the medicine and pharmacopoeia in use, the music and its relationship with the Way of St James, the function of the minstrels and the many mediaeval routes of the pilgrims’ road. 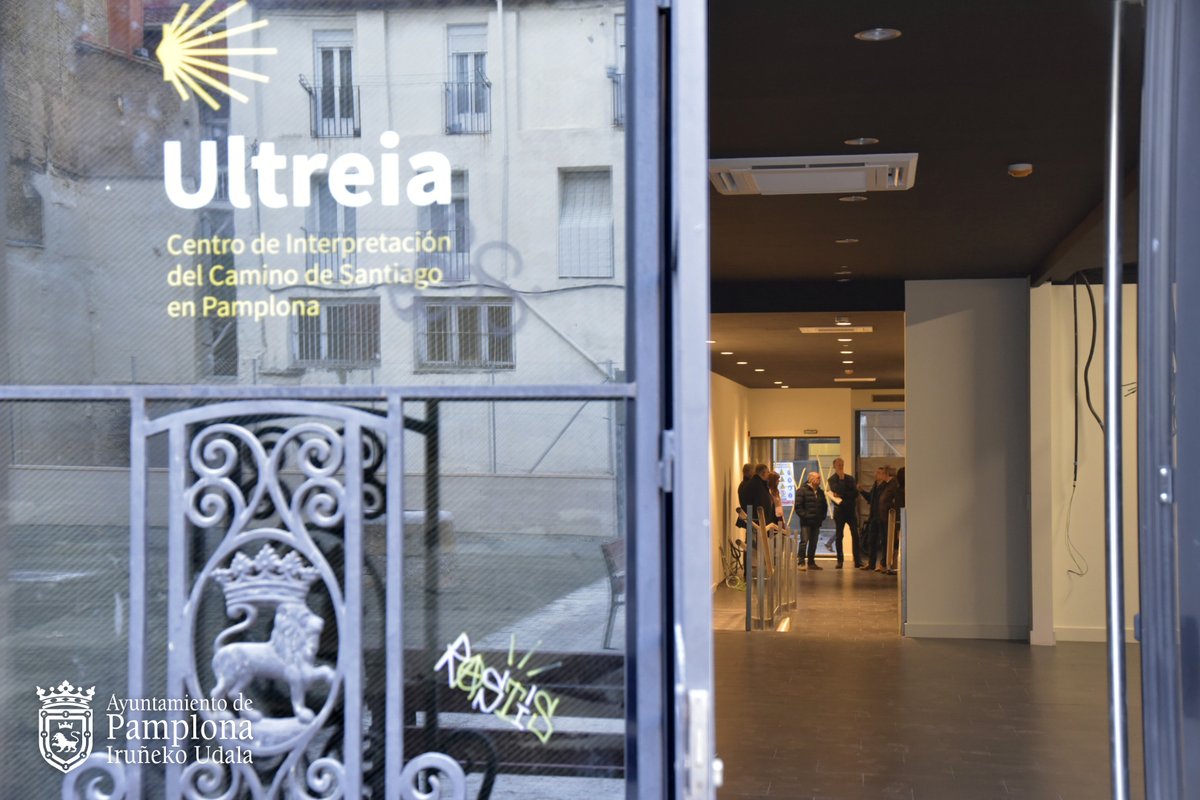 The Way of St James dates from the Middle Ages, when the first pilgrims started to travel to Galicia to see the tomb attributed to the apostle St James the Great in the crypt of the Cathedral of Santiago de Compostela. The pilgrimage became one of the most popular in Europe as of the 11th century, although it was not officially recognised until Pope Alexander VI acknowledged it in the 16th century.

An entire infrastructure to meet the needs of the pilgrims emerged along the Way of St James, including hostels, hospitals and churches of great heritage value, primarily in the Romanesque and Gothic styles. The Way became a major trade route which gave way to the economic development of the regions it passed through and favoured cultural exchange.

Although the popularity of the route dropped off in the centuries that followed the initial boom, interest in the pilgrimage returned in the second half of the 20th century and it is now enjoying its greatest success. It is estimated that spirituality, sport, culture or tourism drives more than 200,000 pilgrims to travel the Way of St James each year.

The Way of St James is not a single path. There are several routes: the French route, the Primitive route, the Coastal route, the Basque-Rioja route and the Liébana route, among others. They have all been recognised by different institutions and bodies. The French Way of St James, the one which passes through Pamplona, has been declared a World Heritage Site by UNESCO and a European Cultural Route by the Council of Europe, and has received the Award for Concord by the Prince of Asturias Foundation. 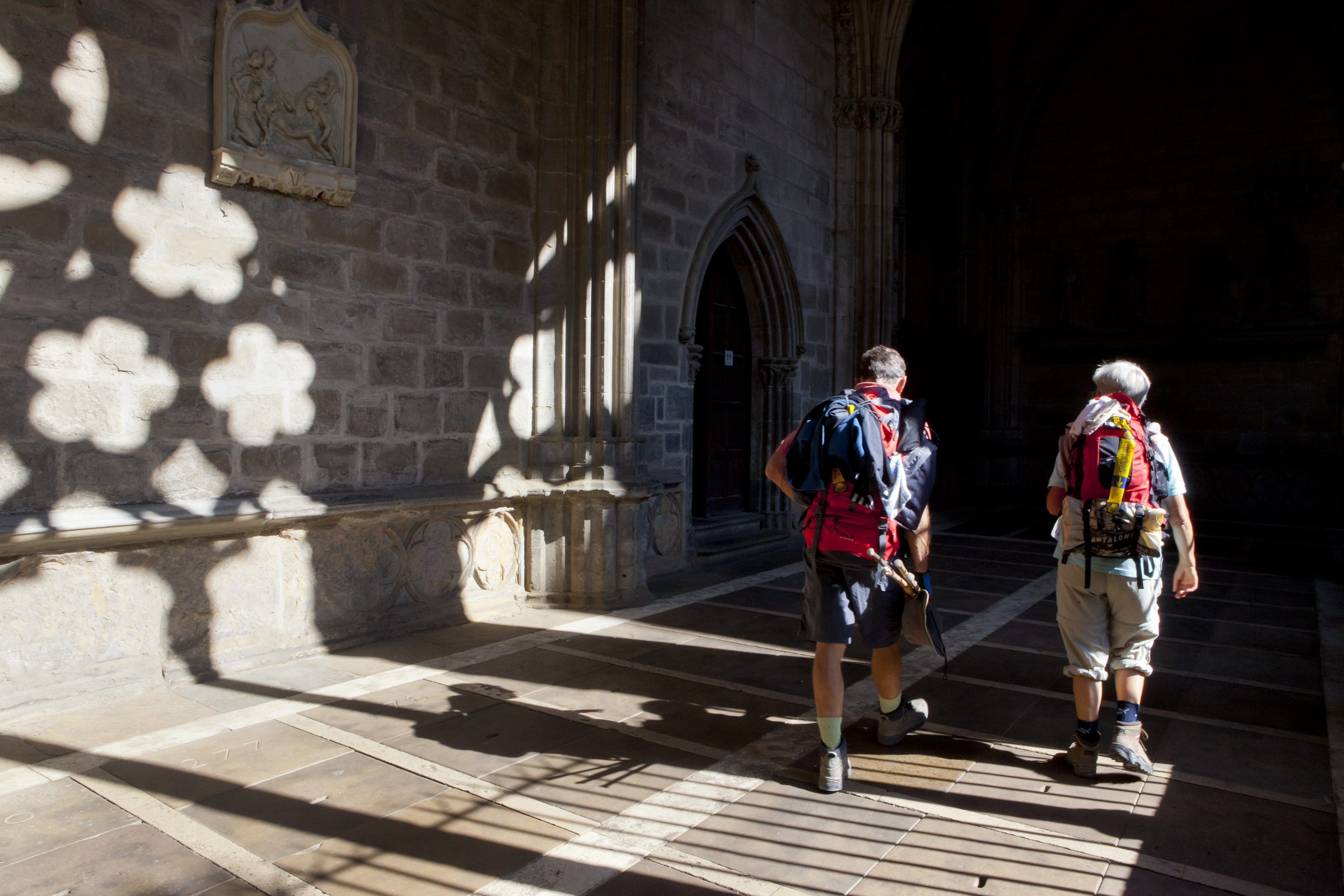 ROUTE OF THE WAY OF ST JAMES

From the town of Burlada, the Way of St James enters Pamplona amidst orchards and allotments on the banks of the River Arga. To reach the city, the pilgrims have to cross the Bridge of La Magdalena, a 12th-century construction declared a Site of Cultural Interest and a National Historical-Artistic Monument, and then enter the old quarter through Pamplona’s Renaissance fortifications, one of the most majestic entrances on the entire route.

Having crossed the threshold of the walls at the Gate of France, with its 18th-century drawbridge, pilgrims are welcomed by the tranquillity of the old town. The Way of St James climbs Calle del Carmen, through Plaza de Navarrería, from which it is possible to admire the towers of the Cathedral of Santa Maria la Real. The cathedral has a Neo-classical façade and houses the mausoleum of the Navarrese king Carlos III, an impressive Gothic cloister and the award-winning sacred art exhibition Occidens, among other treasures.

The Way continues along the cheerful Calle Mercaderes to Plaza Consistorial, presided over by Pamplona City Hall, whose magnificent Baroque façade and balconies bedecked with flowers, from which the rocket which marks the start of the San Fermin festival is launched every 6 July, are not to be missed.

Pilgrims must then carry on along Calle Mayor, once the main street in the city due to the influence of the Way of St James. The street is flanked on both sides by a number of Baroque and Renaissance palaces, including the Palace del Condestable, a 16th-century building declared a Site of Cultural Interest and home to a museum on the violinist Pablo Sarasate, and the Palace de Ezpeleta, Pamplona’s finest exponent of stately Baroque architecture. There is an important church at each end of the street: the mediaeval Church of San Saturnino or San Cernin, built in honour of the city’s patron saint, and the Church of San Lorenzo, which houses the chapel of San Fermin.

The Way of St James finally leaves the old town, leaving the magnificent gardens of La Taconera, which date from 1888, to one side, before crossing La Vuelta del Castillo, a huge park around the Citadel, a pentagonal fortress built in the 16th-17th centuries. It then passes through the Iturrama district and leaves the city through the extremely beautiful gardens of the campus of the University of Navarre, noteworthy for their biodiversity. 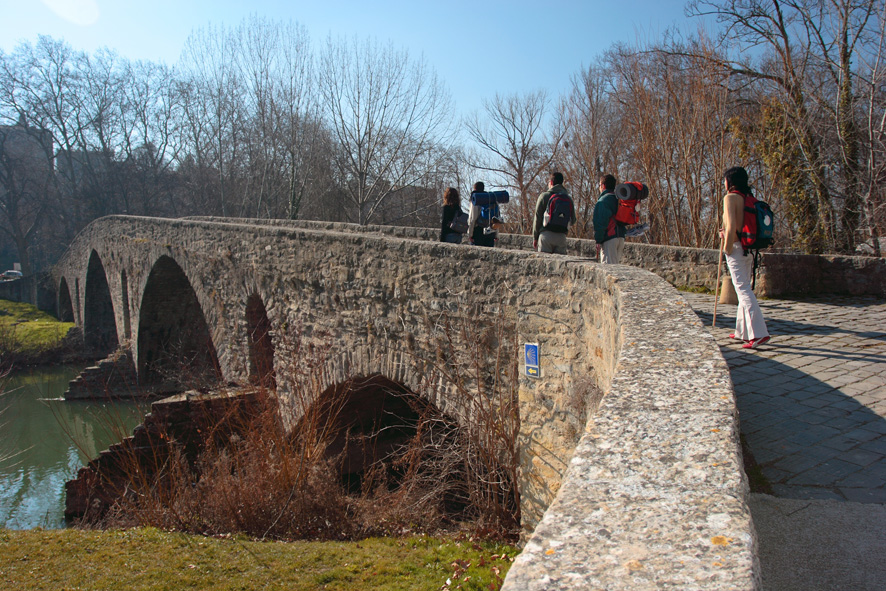 As the first city on the Way of St James, Pamplona is notable for the quantity and variety of the services it offers pilgrims. From here you can catch coaches to Roncesvalles or Saint-Jean-Pied-de-Port, as well as to other locations on the route to Santiago. Thanks to its connections, it is also a good place to start the pilgrimage.

The city has two municipal hostels and six other tourist hostels where pilgrims can stay, not to mention all the hotels, inns and guesthouses of different categories that pepper the route as it makes its way through the city. There are also restaurants and bars offering special meals for pilgrims on the way.

Many companies base their business on the Way of St James, such as clothes and sports shops, massage and physiotherapy centres, luggage transfer companies and bicycle sale and repair shops.

The Pamplona Tourist Office (Calle San Saturnino, 2) and Tourist Information Point (Calle Arrieta, no number) offer all the information you could need to plan your journey and enjoy your time in the city to the full.

If you are going to embark on the Way of St James, you will need a pilgrim’s passport (Credencial de Peregrino). This is a personal document that certifies you as a pilgrim and which you will need to present at many pilgrims’ shelters in order to stay the night and in other establishments to make the most of certain benefits. You can get your passport stamped as you make your way along the route. Bear in mind that, in order to receive the ‘Compostela’ (certificate), you need to get at least one stamp per day (two on the Galician stretch if you are travelling on foot or in the last 200 kilometres if you are travelling by bike).

In Pamplona, you can get your passport stamped in the Jesús y María municipal hostel (Calle Compañía, 4) or at the Archbishopric (Plaza de Santa María la Real, 1). It costs €2.

Before starting the Way of St James, it is important to inform yourself properly and to take a number of things into account. Take note of the following tips: